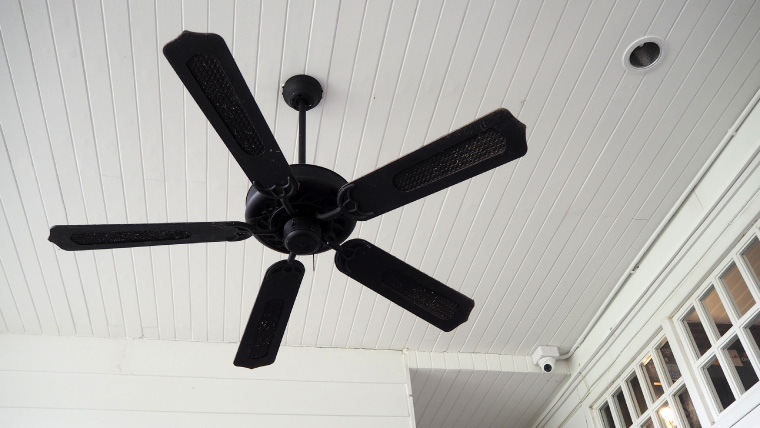 Florida is famous for its hot and sunny weather. It has some of the hottest summers in the entire country. In fact, the summer of 2015 took it to new heights, having the hottest temperatures ever recorded in South Florida. The average temperature was in the high 90’s. Keeping cool is not a luxury, it is a necessity. A powerful air conditioning unit will keep you cool and comfortable, but they are expensive. The higher the temperature gets, the more you will have to pay in order to keep cool and comfortable. Ceiling fans are a smart and economical alternative for keeping cool during those blistering months.

Central air conditioning units are common in South Florida. Most houses come standard with one. These A/Cs run on about 3 kilowatts of energy and cost their users about 36 cents an hour. Contrast that to a high-quality ceiling fan that requires a paltry 30 watts of power and cost only about a single penny to run every hour. The difference is striking. No matter which way you slice it, a ceiling fan is a far more cost-effective option.

Installation is key when deciding to put up a ceiling fan. A higher quality ceiling fan requires more work to assemble and hang than a cheaper alternative, but the quality is much more important. More complex installations are a hurdle, and it’s not advisable to assemble and hang one of them if you do not have the proper training. It’s a smarter move to hire a certified electrician, like Kings Electrical. A certified electrician has the skills and training needed to install a ceiling fan correctly. It should go without saying that a poorly put together and hung fan poses a danger to everyone in the house. A proper installation guarantees the safety of its users, as well as the assurance that the fan is working at its peak.

Another reason to choose a higher quality fan over something a little cheaper is the basic fact that you get what you pay for. A quality ceiling fan provides better air circulation. Better air circulation cools the room down quicker and keeps the room at a stable lower temperature longer. Another important aspect of fans is how much noise they generate. Cheaper ceiling fans could shake and creak, and their motors could whir loudly anytime it is in use. Better quality fans work quietly in the background, making little to no noise even when going at full speed.

South Florida can be warm during the fall and winter, but it is undeniably sweltering hot during the spring and summer. Air conditioning units keep you cool but they are prohibitively expensive to run and maintain. Ceiling fans are the perfect response to that. Fans are far cheaper to buy, install, and power than A/C units. Fan use much less power and that directly leads to cheaper energy bills. Finally, a quality ceiling fan can cool a room almost as well as an A/C. Ceiling fans are the smartest choice this summer.